On the morning of 4th May 1977 there was born at Merrie Stud a golden colt, a descendant of most of the famous bloodlines of the past. It was not envisaged then the influence this attractive colt would have on the Stud and the New Forest Breed as a whole. His name was obvious, Marmalade was exactly right for his colour, which is virtually unique as only mares and geldings are now permitted to be palamino.

The first two years of his life were spent running with the boys alongside the A32,where he learnt self reliance and became used to heavy traffic. In 1980 we were in need of a second stallion and we thought him the most suitable, a grandson of our then senior stallion Merrie Mercury, he would keep this good line going. We started showing him in hand in the Spring and he had his first mares around that time. He was 2nd at his first show and started winning by June. He was backed in August and ridden on through the winter. He was first ridden I n the ring in April and also started jumping. His showing and performance career went from strength to strength, culminating I n winning the Native WHP finals at Malvern in 1988. He qualified 5 times before finally becoming the winner. In 1986 he was Ridden Champion at the New Forest Ag. Show, winning the Horse & Hound Cup. (to be continued) 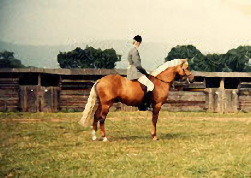 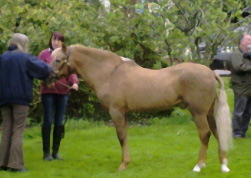